Citrix recently released version of Citrix Receiver for iOS client v7.2.2, which introduced requirements for stricter validation of SSL Certificates. Due to a significant number of complications reported due to improper certificate chaining, SSL security, and certification authority root and intermediate certificate problems, Citrix has responded and will be releasing a maintenance release, 7.2.3. This updated version will revert the stricter validation requirements, in an effort for customers to have more time to remediate client environments. This new version is expected to launch in the App Store on or before June 15th. Please see the announcement from Citrix below. 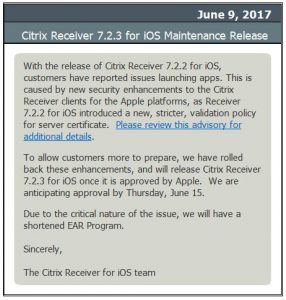 Should an immediate fix be required, users can search the Apple App Store for the Citrix “R1” Receiver release, which will install a second App, based on a previous version of Citrix Receiver for iOS – 6.1.5. Of course, the preferred option is still to upgrade the environment to remove the weaker certificates and meet these proper, stricter validation requirements.